Caring for public health, our rivers, and Lake Michigan has been a matter of conscience in Milwaukee for decades. Early Milwaukeeans, however, for the first half of the 19th century only met immediate sewage disposal needs. Sewage was handled on-site in outhouses and stormwater ran in the streets..

When Milwaukee became a city in 1846, wild rice beds still flourished at the mouths of the Kinnickinnic, Menomonee and Milwaukee Rivers. Wild rice, however, is sensitive to water pollution. As Milwaukee grew as a harbor, manufacturing center, and residential hub, pollution increased. Soon, the wild rice was gone.

Sewer construction was in its infancy and the prevailing public attitude was that waterways were free to use for disposal of wastes. In the late 19th Century, abuse of the waterways became more rampant and the rivers began to stink and pose health risks.

As a stopgap measure to alleviate the putrid conditions in Milwaukee's rivers, flushing tunnels were built - one on the north side in 1888 and one on the south side in 1907. These flushing tunnels pumped huge volumes of Lake Michigan water into the Milwaukee River and the Kinnickinnic River. Nevertheless, conditions in all the rivers worsened. Nearshore Lake Michigan, a source of drinking water, was contaminated. A deadly typhoid scare occurred in 1909.

The City of Milwaukee recognized the adverse effect of polluted rivers and brought in experts to fashion a solution. The process proceeded in "fits and starts" as the issue of how to protect our waterways became embroiled in politics. Eventually, the public was heard. Politicians debated and support grew for a lasting remedy. The Sewerage Commission of the City of Milwaukee was established in 1913, and the arduous job of designing and building a sewage disposal system began.

In 1914, the Sewerage Commission experimented with a new approach for wastewater treatment involving microscopic organisms - the activated sludge method which was being developed in Europe. A pilot plant was constructed on the tip of Jones Island. This pilot plant was eventually replaced by the Jones Island Sewage Plant in 1925. The new plant used the waste activated sludge process. It was the largest facility in the nation to harness nature in order to clean wastewater, by having microorganisms feed on pollutants. But there was a problem with what to do with the resulting material that remained—the abundant volume of microbes. Rather than disposing of the plentiful, nutrient-rich microbes into landfills, in 1926 Milorganite® fertilizer was created.

In the post-World War II years, demand for affordable housing, more commercial development, and increased industrial production produced a boom in the urban areas around the City of Milwaukee. In addition to sanitary sewerage service, the newly developed areas wanted to be freed from flooding of the rivers in the vicinity. The District began a long term construction project that lined the streams and rivers with concrete through the District service area to more swiftly moving floodwaters away from residential areas.

Additionally, the population growth required that the Jones Island treatment plant be expanded, which occurred in 1934 and 1952. A second plant sited in Oak Creek was opened in 1968 and expanded in 1974. 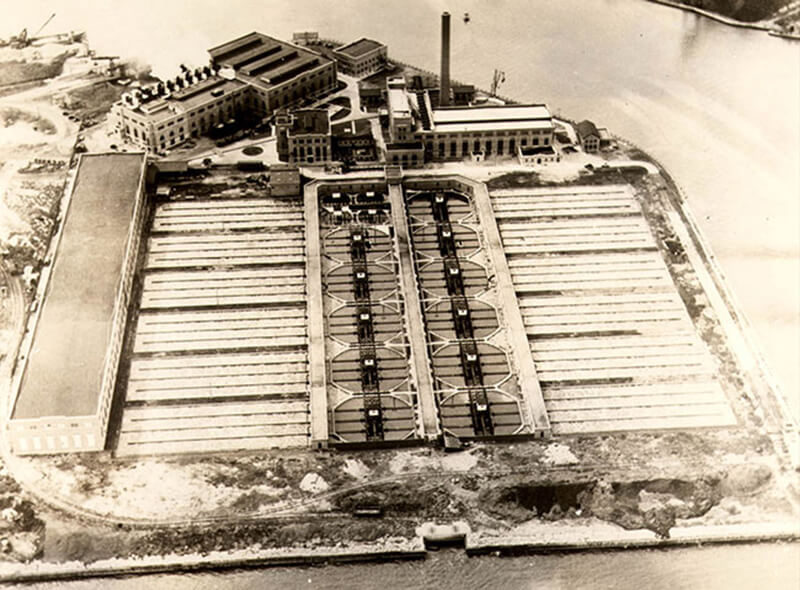 In 1972, Congress passed the Federal Water Pollution Control Act Amendments of 1972. These amendments were again revised by the Clean Water Act of 1977. MMSD initiated studies to improve its system and reduce sewer overflows. Eventually, the Interplant Pipeline between the two plants was constructed, effectively making the two plants a single system, thereby allowing balancing of sewage flows between the plants' more effective treatment and allowing more sludge to be made into fertilizer.

In 1972, the State of Illinois sued both the Metropolitan Sewerage Commission of Milwaukee County and the City of Milwaukee Commission, a legal battle that went all the way to the U.S. Supreme Court.  In 1977, the District reached an agreement with the Wisconsin Department of Natural Resources (DNR) to reduce overflows. Both the Illinois lawsuit and DNR agreement led to the development of the Water Pollution Abatement Program (WPAP), which resulted in major improvements to the regional wastewater treatment system.

As the result of financing disputes over the WPAP between the County and the City Commissions, the Wisconsin Legislature created in 1982 the current Milwaukee Metropolitan Sewerage District that is governed by a single Commission.

After extensive planning and public input, construction on the WPAP began around 1979 to repair and expand the entire metropolitan area wastewater conveyance and treatment system. The cornerstone of the WPAP - Milwaukee's Deep Tunnel System – involved 19.4 miles of Deep Tunnels dug 300 feet underground to help reduce sewer overflows and basement backups. It started operating in 1993.

The region invested $3 billion in the WPAP improvements with $1 billion going towards the Deep Tunnel. Water pollution from sewer overflows dropped drastically from the 8 billion to 9 billion gallons that occurred, on average, every year prior to the tunnel.

MMSD invested another $1 billion in an Overflow Reduction Plan that was completed in 2010. Part of the effort led to two additions to the Deep Tunnel system that currently stores 521 million gallons and stretches 28.5 miles long. Our current financial forecast through 2025 calls for investing $1.5 billion in clean water infrastructure, flood management, and debt financing to help protect public health and Lake Michigan.

Since 1994, MMSD has captured and cleaned more than 98% of all the stormwater and wastewater that has entered the regional sewer system. Nationally, the goal is to capture and clean 85% for communities with combined sewers.

Prior to the Jones Island Water Reclamation Facility, a fishing village existed on the island. 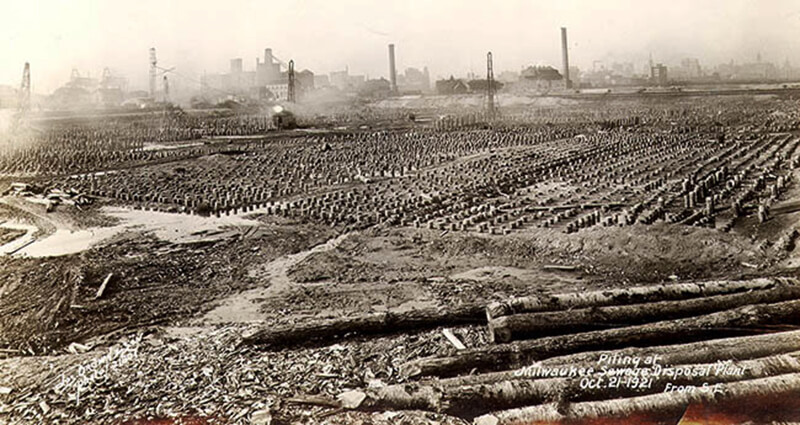 1921 - Thousands of woodpiles are pounded into the ground to support the new infrastructure. 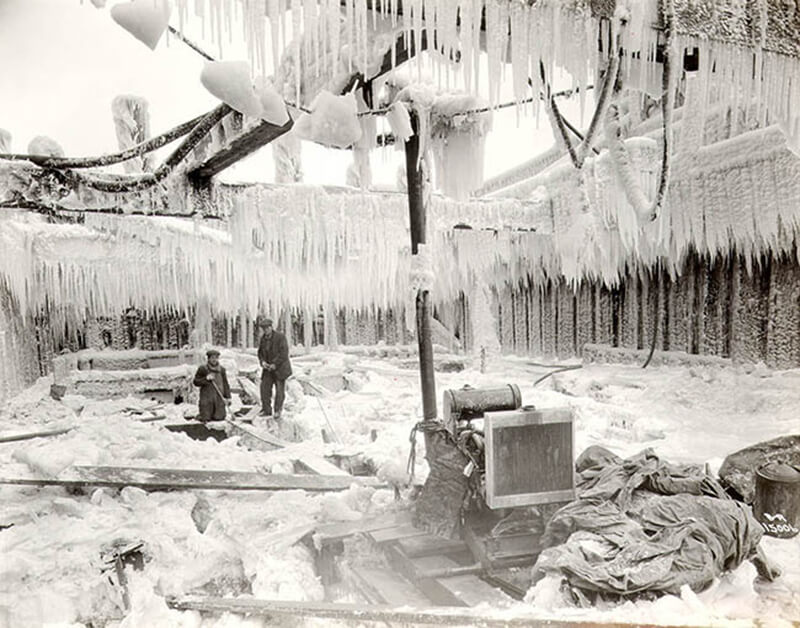 1924 - Having fun building the treatment facilities. 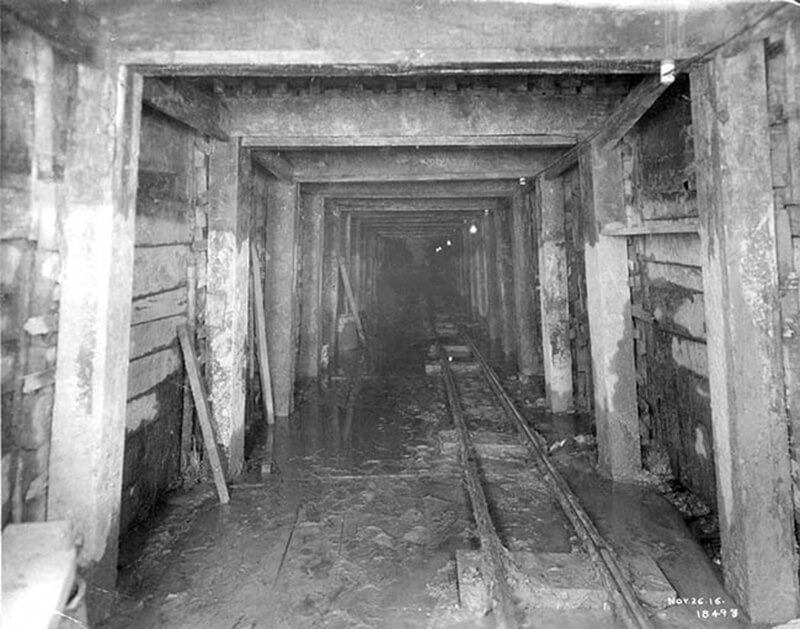 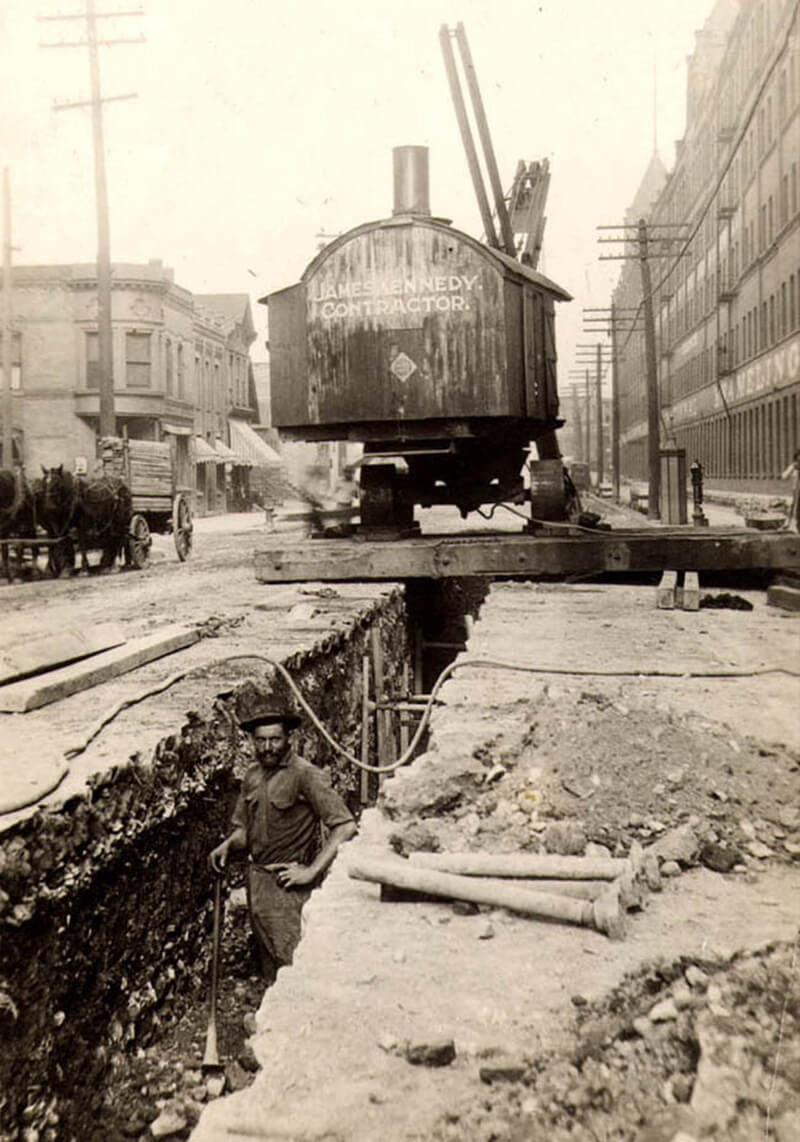 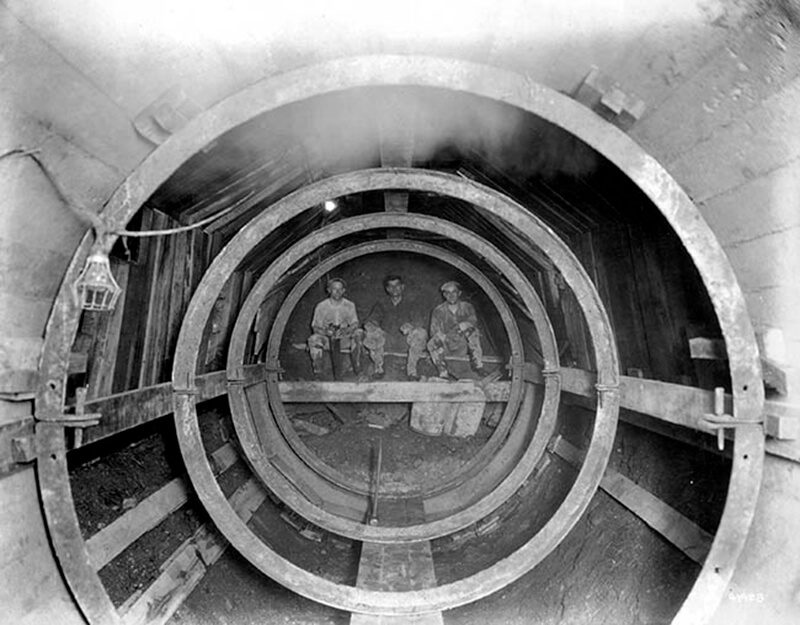 1924 - Taking a break for lunch while building a sewer under Brady St. in Milwaukee.