We have a new design for the West Basin!

The design incorporates feedback we received from residents, businesses, and stakeholders. The design’s central feature is the stormwater basin. Additional planned community amenities include a multi-use plaza, amphitheater, trails and paths, overlooks, a playground and spaces for recreational activities, and a sledding hill.

We need your feedback once again. We want to hear what you think of this new design and to help us add more detail to the design.

Please click on the survey button for a brief survey.

The plan calls for the construction of three, integrated stormwater basins to hold rainwater from major storms. After the storms have passed, the water held in the basins will slowly drain to Lincoln Creek. The North and East Basins along North 30th Street were completed in 2018. The West Basin Stormwater Management Project is the final component to be constructed.

The West Basin has a planned capacity of 31 million gallons and is designed to reduce stormwater flooding up to a 100-year storm event. The City of Milwaukee is a major project partner and will have significant concurrent stormwater projects along N. 35th Street and W. Capitol Drive to further reduce flooding.

The project site is located along North 35th Street between West Congress and West Hopkins on ten acres of abandoned industrial property. The site is bordered on the east by a series of railroad tracks and on the west by a residential community. The property has a long history of industrial use and associated contamination. The removal of this legacy contamination is one of the first tasks that has been undertaken as part of this project.

The constructed basin will be roughly the size of ten football fields and nearly 20 feet deep, creating a significant change to the landscape and surrounding neighborhoods. Community engagement began two years in advance of the project to help residents understand the need for the basin and to prepare them to be involved in the stakeholder process.

North 35th Street is a high-traffic thoroughfare known for high speeds, accidents, and injury. It divides the neighborhood from the project site presenting significant concern to residents. Street safety will be one of the topics discussed in the engineering design process.

The project provides great opportunities for additional community amenities. The community has expressed interest in walking trails, a neighborhood gathering space, and modifications to improve the safety along 35th Street. These ideas will be considered as part of the engineering design stakeholder process. The Rails-to-Trails Conservancy has undertaken a study for the 30th Street Corridor Shared-Use Trail, a section would be located along the basin project site. 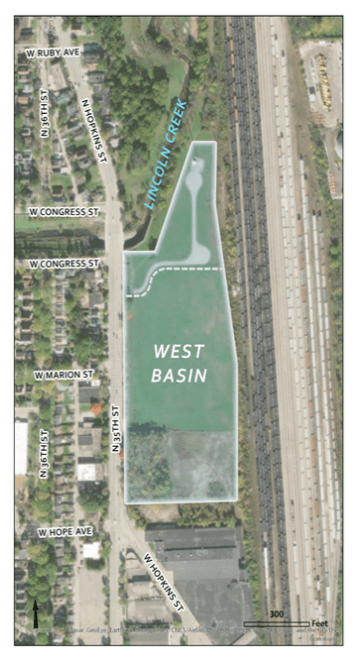 The three design ideas for the West Basin project incorporate community input gathered over the last year. Each design has a different emphasis, and each idea includes the community’s priority improvements: playground and youth activities, community gathering spaces, trails and paths, gardens and market spaces, year-round activities. All design options meet the project goal for stormwater capture and containment.