A Toxic Legacy: Milwaukee Prepares to Clean Up 150 Years of Water Pollution

Last March, when Milwaukee learned that it would be hosting the 2020 Democratic National Convention, you could practically feel the city’s pulse quicken. COVID-19 has slowed that pulse dramatically, but the announcement was still a historic win for Milwaukee. However reduced in scale, this month’s convention will bring new recognition and at least a trickle of new money to a city that has generally flown below America’s radar.

We are now in the running for another national prize that should get our collective heart rate up again, and this time for much longer than a few days of speeches and balloons. In scale, speed, and impact, it would be a huge step forward for Milwaukee and a historic win for the entire Great Lakes region

The prize is federal funding for a massive cleanup of Milwaukee’s waterways. What’s proposed is nothing less than removing all the polluted muck from the city’s streambeds and allowing them to flow over clean bottoms for the first time in at least 150 years. The cleanup would cost somewhere north of $200 million, 65 percent provided by U.S. taxpayers and the rest from local sources. That would make it one of the largest public works projects in Milwaukee’s recent history. For comparison, $200 million would fund the city’s entire library system for nearly a decade.

The work is decidedly unglamorous but entirely necessary. The tall figures of Milwaukee’s past may have been hard workers and visionary thinkers, but collectively they were an environmental disaster. With no practical alternatives, few regulations, and a near-total lack of respect for the resources they found here, our ancestors turned the city’s rivers into open sewers.

By 1878, when Milwaukee’s population had surged past the 100,000 mark, the community had nearly 75 miles of sewer pipe under its streets. The system’s sole function was to carry human, animal, and industrial waste, mixed with stormwater, to the nearest river; treatment was not the remotest option. Decades of dredging and docking had put the current to sleep, allowing the filth in our waterways to simply sit there until a heavy rain or the municipal flushing pumps pushed it out into Lake Michigan. An 1881 visitor described the Milwaukee River as “a currentless and yellowish murky stream, with water like oil, and an odor combined of the effluvia of a hundred sewers.”

Household sewage and horse manure were the worst of it, at least in the short term. They consumed nearly all the available oxygen in the rivers, making them uninhabitable for native aquatic life. In the long run, however, the greater menace was the steady stream of contaminants from local industries. For generations Milwaukee’s machine shops, tanneries, breweries, and manufactured gas plants simply dumped their waste products—oil and grease, coal tar, hide scrapings, heavy metals, PCBs, PHAs—into the nearest stream. Human and animal waste dissipated over time, but industrial pollutants became the gift that kept on giving.

The water in Milwaukee’s rivers is noticeably cleaner today than it was a generation ago, thanks in no small part to the Deep Tunnel system that opened in 1993. The muck at the bottom of those rivers is another story entirely. The “legacy” contaminants of our polluted past are still there, endangering human health, killing aquatic organisms, causing deformities in fish, and compromising our claim to be a global water hub. Since 1987 the Milwaukee estuary—our harbor and the rivers that feed it—has been a federally designated Area of Concern, one of 43 hot spots on the Great Lakes. The AOCs are a club that no one wants to join.

What is an Area of Concern (AOC)?

It's defined in the United States-Canada Great Lakes Water Quality Agreement as "a geographic area designated by the Parties where significant impairment of beneficial uses has occurred as a result of human activities at the local level." It is an area that has experienced environmental degradation. When AOCs were originally identified, there were 43 areas in the Great Lakes region. As of August 2016, 7 AOCs (4 in the US and 3 in Canada) have been de-listed.

Membership need not be permanent. Since the establishment of the Environmental Protection Agency in 1970—and passage of the Clean Water Act two years later—the federal government has played a leading role in America’s cleanup efforts, including several in Milwaukee. Federally supported remediation projects have been going on under our noses for decades, in the Milwaukee River, the Little Menomonee, the Kinnickinnic, the Menomonee Valley, Cedar Creek, and Lincoln Creek.

For all the good they’ve done, none of these projects has attracted much attention. Part of the reason may be their piecemeal nature—a hot spot here, a point source there—but the lack of awareness may also have something to do with the formidable jargon of the federal bureaucracy. Trying to understand the ongoing cleanup effort can be an Adventure in Acronymland. In fact, the program most relevant to Milwaukee can be fairly summarized in capital letters: The EPA’s GLRI supports RAPs to remove BUIs in AOCs. In somewhat plainer English, the Environmental Protection Agency’s Great Lakes Restoration Initiative supports Remedial Action Plans to remove Beneficial Use Impairments in Areas of Concern. 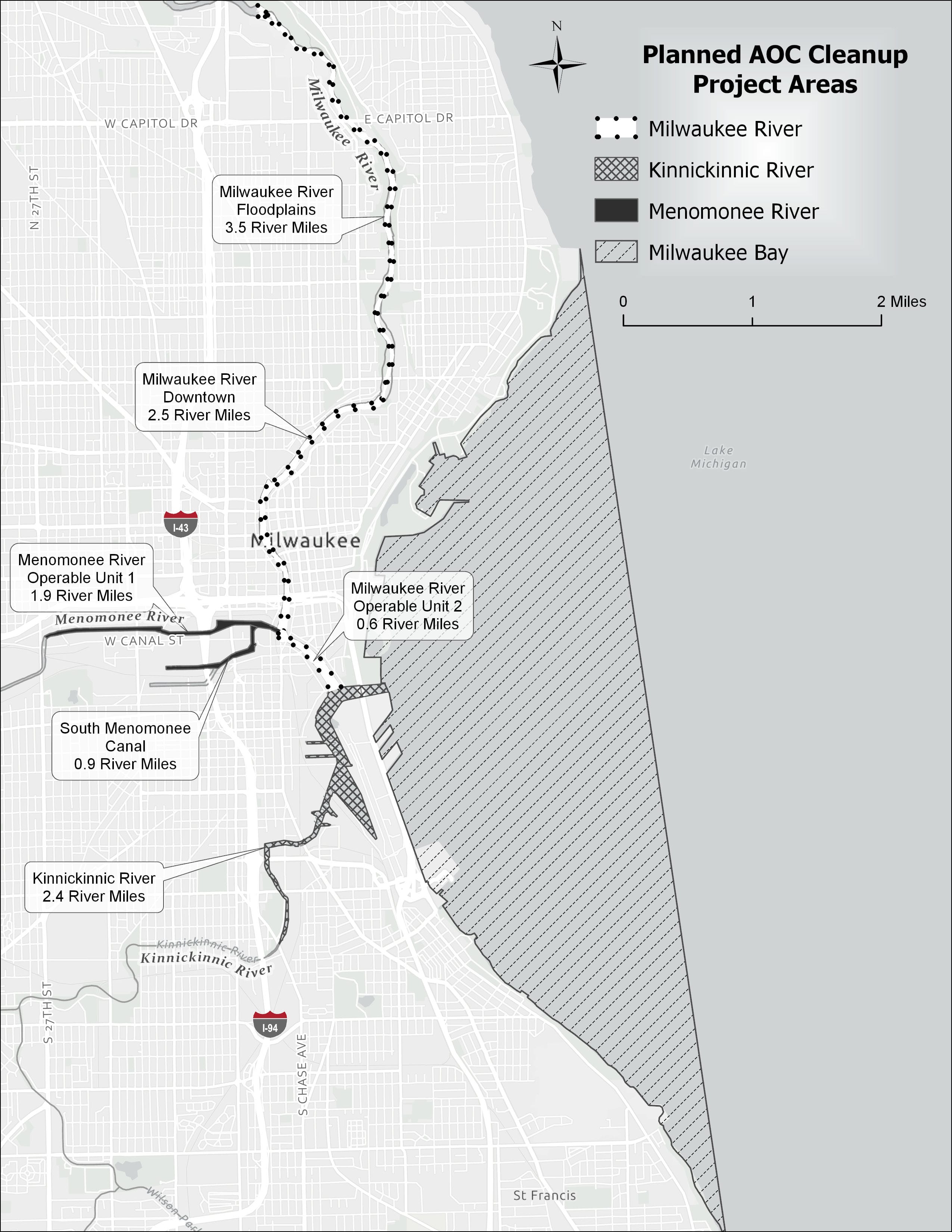 When you get to the bottom of this alphabet soup, the underlying reality is undiluted good news: Milwaukee has a generational opportunity to solve one of its longest-standing problems, not piecemeal but all at once. The EPA has identified ten AOCs, Milwaukee’s among them, as priority targets for its Great Lakes remediation efforts over the next four years. Milwaukee, in turn, has assembled a united front of agencies—city, county, state, and nonprofit—to coordinate the cleanup. Money is already flowing through the pipeline. The EPA has agreed to fund 65 percent of the preliminary work, which is projected to cost $29.3 million, and efforts are underway to raise the local match.

Milwaukee’s ultimate goal is to quit the AOC Club, i.e., to be “delisted” as an Area of Concern. Delisting is a highly technical process that requires the removal of specific impairments. They include degraded wildlife habitat and poor aesthetics—problems that will be addressed in due time—but seven of the eleven impairments that landed Milwaukee on the list rise from contaminated sediments. Before we can leave the club, we’re going to have to get rid of the toxic ghosts that lurk in our watery basements.

Although the details are still being worked out, the general outline of the proposed AOC cleanup is clear. Giant vacuum hoses would suck up the contaminated muck from approximately seven miles on the Milwaukee River, three on the Menomonee, and two on the Kinnickinnic, including the basin where all three streams meet and tons of the region’s waste came to rest. The worst of the material would be trucked to out-of-state landfills, but the greater part would be piped to a new containment facility on the lake side of Jones Island, adjoining an older fill site north of the Lake Express ferry dock. Most of Jones Island is already “made land” deposited over the last century. The disposal facility, engineered to keep 1.7 million cubic yards of waste where it belongs, would create another 46 acres, giving the Port of Milwaukee new docking space and the public another park.

Nowhere on the Great Lakes has such a massive cleanup been attempted under a single agreement involving so many players on such a short timetable. Excitement is building as the project moves forward. “I’ve been calling our region the Fresh Coast for years,” said Mayor Tom Barrett, “and to live up to that name, we need to maximize recreation and wildlife along our waterways. Cleaning up the AOC would give us a history-making fresh start.”

It might be more accurate to say that the project would unmake history. Parents are accustomed to cleaning up after their kids, but we’re about to start cleaning up after our parents—and the generations of parents who polluted our rivers before them.

It’s an odd position to be in, but someone has to be the grown-up here. Let’s hope we get the chance. Even though the AOC project has generated significant momentum, there’s no guarantee that we’ll be able to turn these ambitious plans into freshwater realities.

What will it take to keep the momentum building? A continued spirit of collaboration. Stable funding for the EPA’s Great Lakes Restoration Initiative. And steadfast, demonstrated public support from throughout the region. Our ancestors left us a toxic legacy. Let ours be the generation that takes care of it once and for all.

Looking for something to do to make a huge difference in your community, and only needs to be done twice per year? Consider adopting a section of the Milwaukee, Menomonee and Kinnickinnic Rivers to help keep them clean. 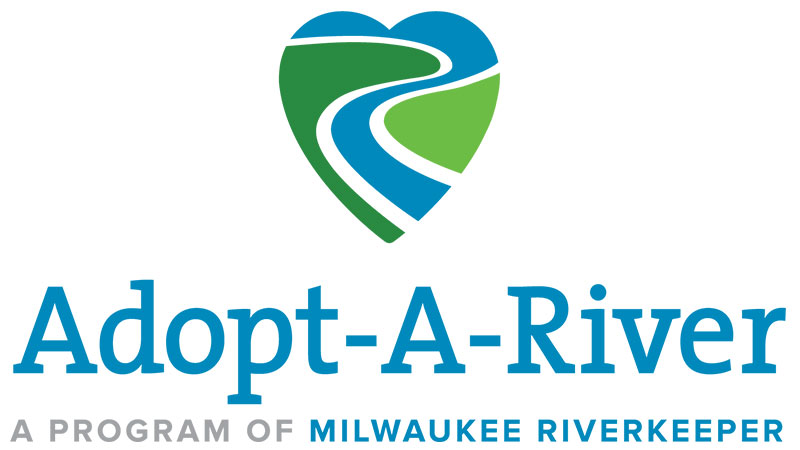