The first phase of the project was completed this spring. During the first phase, three work shafts were excavated for the tunnel boring machine. The shafts are large structures that allow for the installation and removal of the tunneling equipment.

After excavation of the shafts was complete, phase two began – tunneling of the sewer. The tunneling began at the River Park, the starting shaft for the project.

The first leg of tunneling runs from River Park west to the Oak Leaf Trail. After the tunnel to the west is completed, the second leg of tunneling will begin heading east toward Maryland Avenue.

The Oak Leaf Trail will be open throughout construction. Flaggers will be present whenever the contractor needs to cross the trail with equipment.

Interested in this project and want to know more? The Edgewood Avenue FAQ is a good place to begin.

The major rainfall events of July 2010 caused widespread flooding across the Milwaukee area and were particularly devastating to the Village of Shorewood with hundreds of homes experiencing surface or basement flooding.

The Milwaukee Metropolitan Sewerage District is building a new sewer (Near Surface Collector), along Edgewood Avenue, that will increase the capacity of MMSD’s regional sewer system and the local sewer systems. In times of high flow, excess wastewater will flow from the existing sewer system into the new pipe and then to the Deep Tunnel for storage and treatment.

Although eliminating basement backups cannot be guaranteed since the threat of more severe storms does not go away, this new sewer is the first portion of a threefold approach to reduce the risk of basement flooding. Second, as part of this project green infrastructure will be added to River Park to help water soak into the ground when it rains, keeping it out of sewer pipes. Third, the Village of Shorewood is undertaking a large-scale relief sewer plan to reduce residential basement backups. 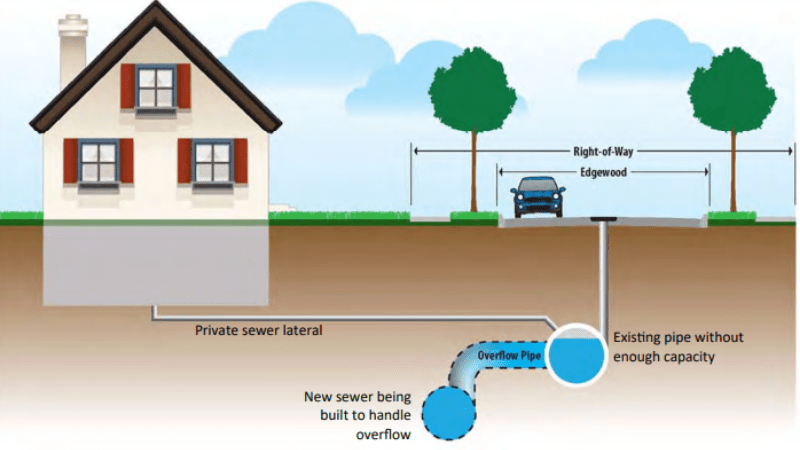 Although the new sewer is being constructed with a less disruptive technique (microtunneling methods), the project is complicated and will create inconveniences for residents closest to the construction zone. Edgewood Avenue itself will remain open to traffic for most of the construction (periodic partial closures for deliveries.) Portions of Murray Avenue and Maryland Avenue will be closed for the duration of the sewer construction and roadway restoration.

The south end of River Park will be under construction to accommodate green infrastructure improvements in the area. The ball diamond will remain open, though there will impacts to parking and some amenities. Some trees in the park and along the residential streets may be removed when they cannot be avoided. Removed trees will be replaced, per Village requirements.

The Oak Leaf Trail will be open during construction.  Flaggers will be present whenever the contractor needs to cross the trail.  Additionally, a trail counter is being added to the trail near the Providence Avenue intersection as part of the project.

*Timeline is subject to change